Climate change in the Himalayas will result in smaller glaciers and less meltwater. However, the water levels of its rivers will not drop over the next century, due to an increase in monsoon rains in the region. Research by scientists from Utrecht University (Walter Immerzeel, who also works for FutureWater), Deltares and ETH Zürich led to the discovery. An article on the study will be published in Nature Geoscience on 5 August 2013. While the research results predict a sombre future for the Himalayan glaciers, they offer hope for water and food security in India, Bangladesh and Pakistan.

The rivers in the Himalayas, such as the Indus and the Ganges, are supplied with meltwater from glaciers and snow and are essential to the food supply of hundreds of millions of people in the lower-lying areas. Understanding the impact of climate change on the glaciers in upstream areas is therefore crucial.

Precipitation increase
“Our research shows that the size of the glaciers in the watershed of the Indus and the Ganges will decrease during the 21st century,” explains Marc Bierkens, professor of Hydrology at Utrecht University and staff member of Deltares. “Yet, surprisingly enough, water discharge in this region is increasing, rather than decreasing. The reasons vary greatly from one watershed to another.” In order to understand the impact of climate change on river discharge in the Himalayas, the researchers created computer models of the glacier movements and water balance in two watersheds that vary greatly with regard to the climate and size of the glaciers. 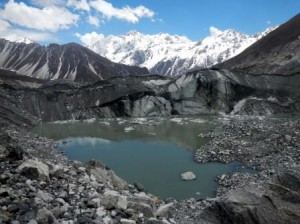 In the eastern watershed (Langtang in Nepal, where the Ganges has its source), the relatively smaller glaciers melt quite quickly. There the increased water discharge is a result of the increase in monsoon rains. The western watershed (Baltoro in Pakistan, where the Indus has its source), on the other hand, is dryer and colder and has much larger glaciers. The increase in discharge in the basin there is due to increased glacial melting. According to the calculations, the peak in glacial melting will be reached around 2070 when the glacial discharge will start to drop. However, there too the increase in precipitation will compensate for this, as a result of which the discharge from the watershed will then increase again.

Caution
The researchers emphasise that the results should be interpreted with caution. Glaciologist Francesca Pellicciotti of ETH Zürich explains, “The research concerns two watersheds, and while the models are representative they only relate to a small area of the Himalayas. Furthermore, we concentrated on the impact on average discharge, rather than extremes.” 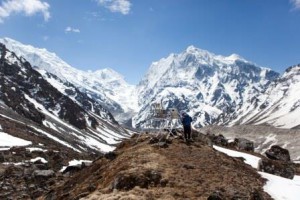 Contradiction
These results contradict previous research published by the same group in Science in 2010, which concluded that the discharge would drop around 2050. “We are now using a more advanced glacier model that takes into consideration how slowly glaciers respond to climate change,” explains Walter Immerzeel (hydrologist and researcher of Utrecht University and ETH Zürich). “The key difference is that previous work by our group and other scientists showed that the extent to which precipitation in the western Himalayas increases with altitude is much greater than we previously thought. The computer model used for this research takes these new insights into consideration.”