On 11 December the HKH Water Atlas (‘The Himalayan Climate and Water Atlas: Impact of Climate Change on Water Resources in Five of Asia’s Major River Basins’) will be launched at the 2015 United Nations Climate Change Conference (COP21). The conference is held in Le Bourget, Paris, France from 29 November to 11 December.

The HKH Water Atlas, ‘The Himalayan Climate and Water Atlas: Impact of Climate Change on Water Resources in Five of Asia’s Major River Basins’ is produced by the International Centre for Integrated Mountain Development (ICIMOD), GRID-Arendal and the Centre for International Climate and Environmental Research-Oslo (CICERO).  This new publication offers a comprehensive, regional understanding of the changing climate and its impact on water resources in five of the major river basins in the region: the Indus, Brahmaputra, Ganges, Salween and Mekong. The atlas shows clearly that the region’s climate, which has been changing rapidly, will continue to do so in the future, with severe consequences for populations locally and downstream. Furthermore, it includes recommendations to encourage policy makers to develop flexible and cooperative strategies between countries in order to deal with increased variability and to meet the challenges posed by either too much or too little water.  The findings are drawn from several years of research under the Himalayan Climate Change Adaptation Programme (HICAP), with external reviews from international experts, funded by the governments of Norway and Sweden. 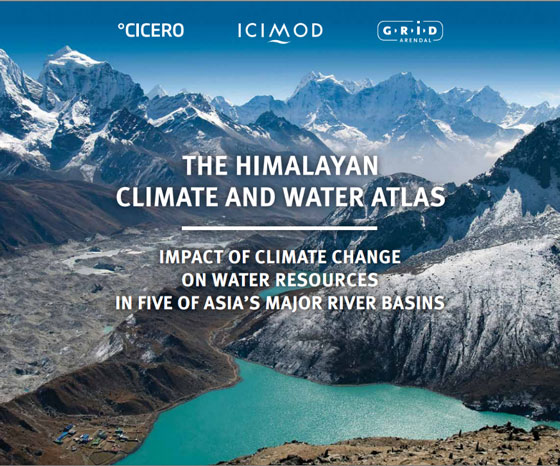 HICAP addresses climate change adaptation challenges across different related disciplines such as water resources, ecosystem services, food security, vulnerability and gender. Part of the project is related to the generation of water availability scenarios from upstream river basins that are primarily characterized by snow and glacial melt. ICIMOD has contracted FutureWater to generate these scenarios based on a high resolution hydrological model that FutureWater has developed. The project ran from January 2012 until June 2013. FutureWater generated climate change and water availability scenarios for the upstream parts of the Indus, Ganges and Brahmaputra river basins.