Last week FutureWater, together with its partner HiView, gave 2 days of lectures at IHE Delft Institute for Water Education, which partners with UNESCO. As part of their master degree, around 10 students were taught on the theory behind flying sensors (also known as drones), the different types of applications and how to use them in an agricultural setting.

On day 1 an excursion was made to the Hoeksche Waard, where two flying sensor flights were performed at a large agricultural area: one with the senseFly eBee, a fixed wing aircraft, able to cover large distances in a short time and one with the DJI Mavic Pro, a quadcopter, which is very manoeuvrable, easy to use and less expensive. The DJI Mavic is also used successfully by FutureWater and HiView in the ThirdEye project in Kenya and Mozambique and APSAN-Vale project in Mozambique.

On day 2 of the lectures, students processed the images taken by the flying sensors, using open source software and presented their results. The final NDVI (Normalized Difference Vegetation Index) maps show where the crop is stressed. This stress is indicated by red colors on the map and can indicate a lack of water, nutrients or the abundance of a pest or weeds. Thanks to the special cameras on the flying sensors, this stress can be detected 10 days before it can be observed by the human eye. In this way farmers can be advised before actual crop damage occurs and take preventive measures to ensure a higher yield. Furthermore, farmers can reduce their water, fertilizer and pesticide use by only focusing on problematic zones instead of applying these inputs to their whole field. 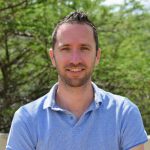